A chair sits in the middle of the desert
It is said to be a laughing chair
Mysteriously at night
In the vicinity of the chair
A continuous laugh is heard over the airwaves (87.9 fm)
No one knows why
Only rumors passed down
Some say it is haunted
Tales migrate on the desert wind
El que se rie cuando le da la gana
He who laughs when he wants

In the barrens of an unfulfilled desert home site at the periphery of small town, Big River, CA. adjacent both the Colorado River and the Arizona border, nestled amongst sand and pebbles emerges a wrought iron sign that announces the existence of a laughing chair. Beyond this marker sit two institutional blue plastic and metal chairs horizontally separated and facing the viewer as if at attention to some instructor’s lecture. Slightly behind these seats and through their horizontal separation sits another institutional chair. This one however, is orange plastic, metal, and contains an attached wooden desk arm. Most significantly this seat faces the opposite direction and/or turns its back to the viewer in a somewhat defiant gesture and separation from the adjacent chairs. This is the outcast, rebel, and castigated member of the ensemble whose incessant laugh is heard over the airwaves of the radio once the sun goes down. The broadcast is in the vicinity of the site on an FM station (87.9) near the end of the dial. This is the laughing chair that is described in a short Spanish language film at the Calzona Art Site. El Que Se Rie Cuando Le Da La Gana is a land art performance installation that joins the circuit of folktales of the American West and specifically the Colorado desert region. This work was inspired by a mixture of personal instances, the spirit of the desert, and the popular myths that circulate like those of the Chupacabra, La Llorona, and Bloody Mary whose presence are made known through passed down tales carried on the breaths of believers and non-believers alike. El Que Se Rie Cuando Le Da La Gana or “He who laughs when he wants”, is the embodiment of rebellious individualism or those who have chosen not to conform to the norms and structures imposed by societies upon their inhabitants at large. They who have expressed the fortitude to choose their own voice and path as have so many ‘a wild character’ who has planted their roots amongst the harsh vastness of the desert landscape. 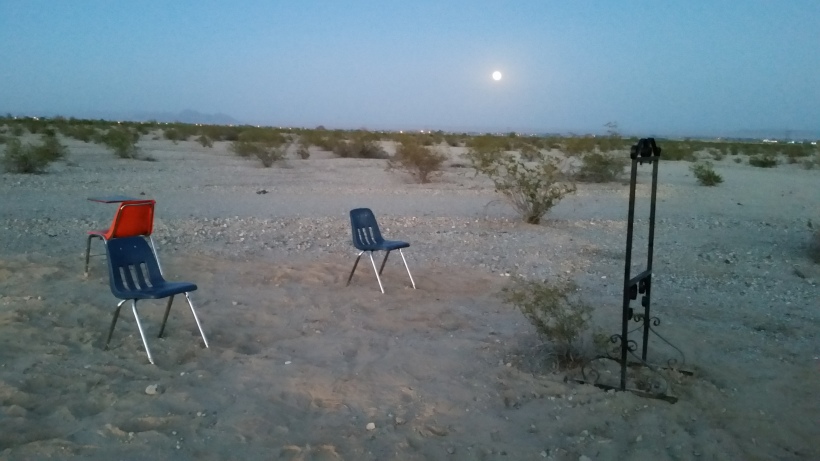